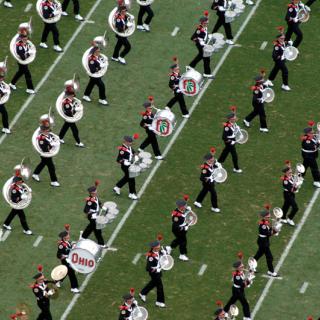 Erin Flucke
Ohio State University and Marching Band alumnus
“
I want to help the kids believe in their dreams like she helped me believe in mine.
”
Meg Gulick describes how Erin Flucke's mentorship and friendship inspired her to mentor and help others.

MEG GULICK: Erin Flucke was a student at Ohio State, in the OSU marching band. I met Erin in 2003 in a 4-H Club in Licking County, called the Licking County 4-H Band. At that time, she was in the OSU marching band. My first memory of her was when I was 13 and she was 18 and she was playing a trumpet solo at a practice for the 4-H band. She was one of the oldest kids in the band and she really just helped out the younger kids and really made them feel welcome. One of the things I remember about Erin is that even when her older friends were hanging out by themselves, over in a corner, talking about college and high school, she came over and sat with me, this lonely 13 year old, and started talking to me and getting to know me and that made all the difference to me as a self-conscious 13 year old. She also helped the other younger kids with their music by sacrificing her free time at band camp.

She told me about the OSU marching band, then she and her dad took me to go see a practice of the OSU marching band and I was hooked. Lots of people told me that the marching band was so difficult and so competitive and I didn't have a chance: I was just this high school kid from a podunk town and didn't have a nice trumpet and I didn't have the experience and I wasn't built to be a trumpet player and she looked at me and said: "Let's work on it and you can be in that band, too." And sure enough, with her help, I was there.

The most important thing that she taught me was that I can do it: anything I can set my mind to do, I can do it. One of the most important things that Erin taught me was discipline. When we were practicing for the marching band and it was hot out, it was raining, and the blacktop we were practicing on was slippery, she'd say "You want to be in that band or not? If so, you stay out here and let's practice."

A different kind of discipline that she taught me was how to take criticism. When you practice for 10 hours a week on something and then you get to practice that night and one of the older kids comes up to you and says "No, you're doing it wrong; it's this way," you don't yell and say "I practiced all day and all week on this." She helped me realize that you just say "OK, thank you for helping me, I will do this next time." She helped me learn that they weren't trying to knock you down when they gave criticism; they were trying to help you out.

A characteristic about Erin's that made her an important part in my life is that she encouraged people to follow their dreams, and she actually believed in them - not just like when people would say "I believe in you, yeah, you can do that." She actually did, and you knew that.

I'll definitely remember the influence she had on me; I'm a 4-H advisor now back in that 4-H band and I want to help the kids believe in their dreams like she helped me believe in mine. If you asked me when I was 16 or 17 if I ever wanted to work with kids when I grew up, I'd say "Heck no!" But after her being a mentor to me and realizing how profound an impact that had on my life, I want to give that back to the kids.

It was my dream to march with Erin in Ohio Stadium in front of 150,000 screaming Ohio State fans and it finally happened once I made the Ohio State Marching Band and she joined the Ohio State Alumni Marching Band and we gave a joint performance at the beginning of the football season. It was a thrill to march down that ramp and be on the field and then see Erin come down the ramp with the alumni band and to know that we were on the field together, both fulfilling our dreams and knowing that she helped me get there.

If you have a disability and experience difficulty accessing this content, contact the Office of Diversity and Inclusion’s Accessibility Coordinator at odi@osu.edu.